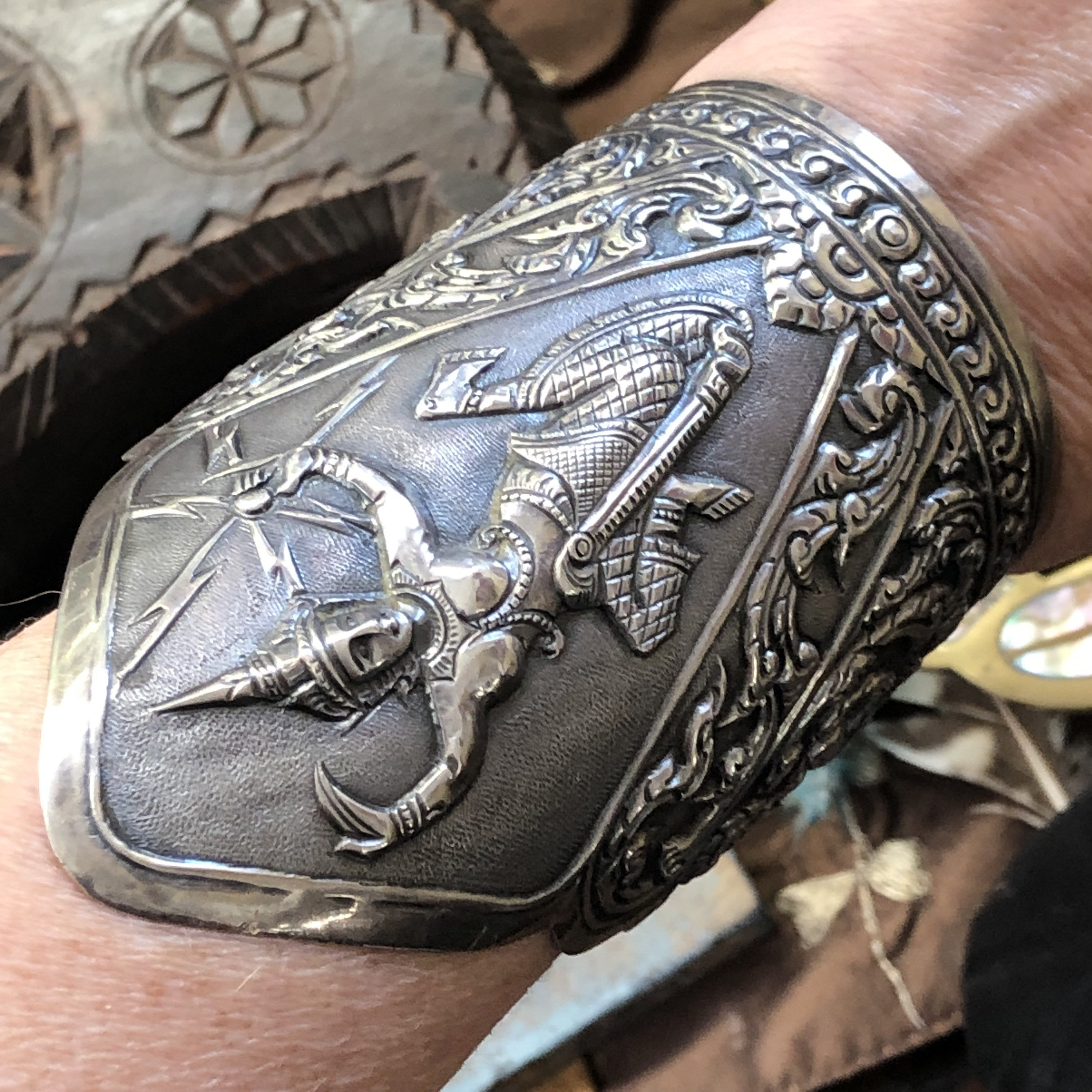 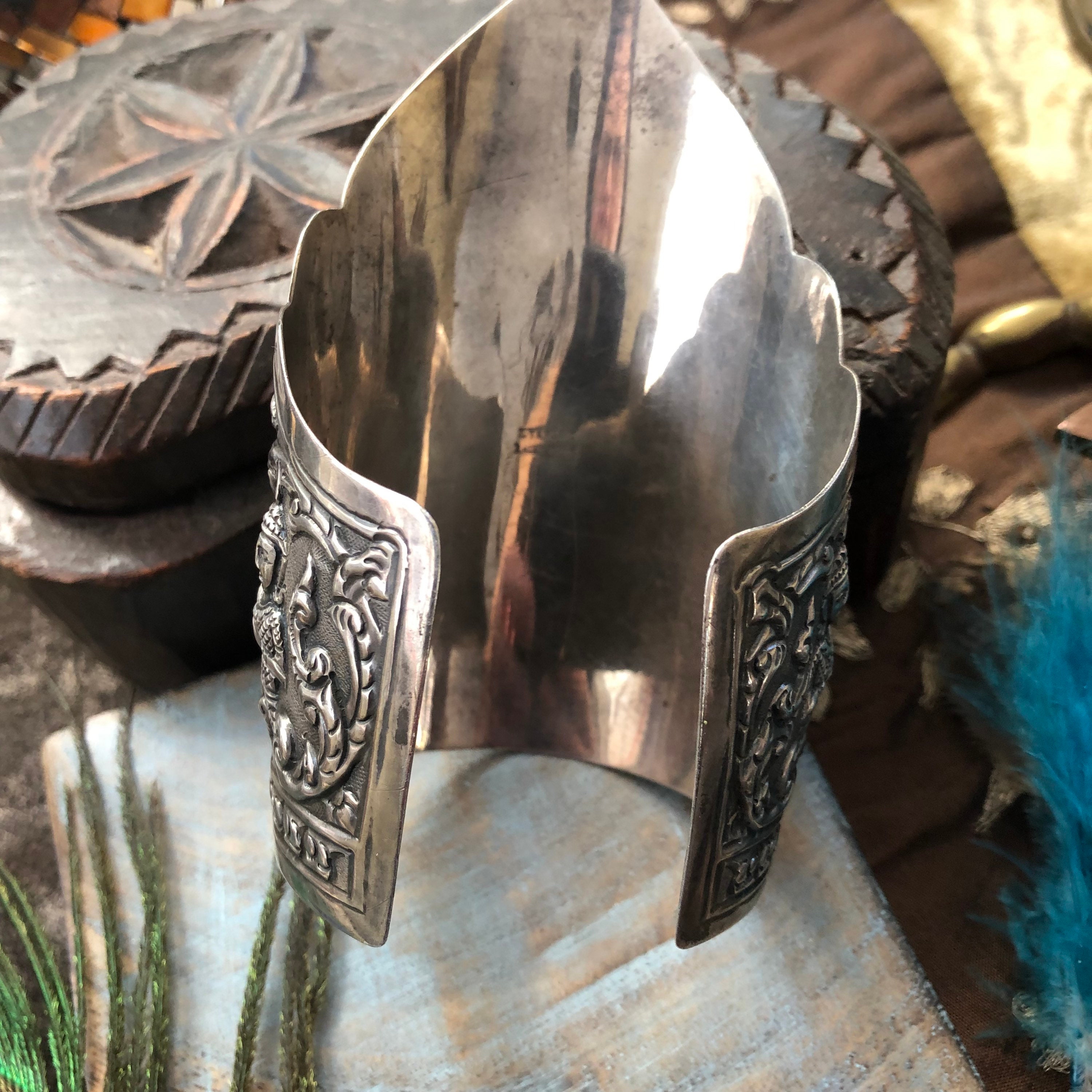 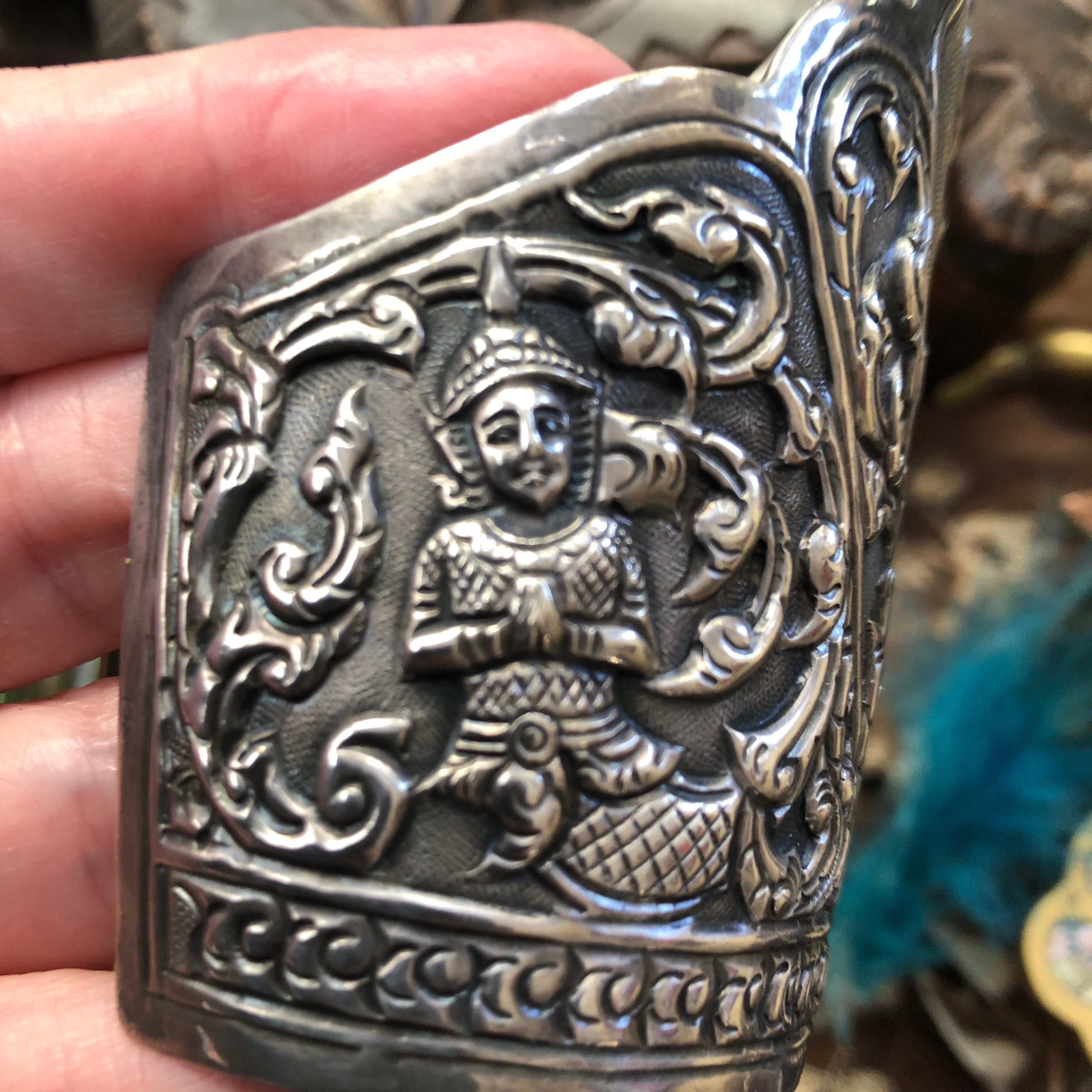 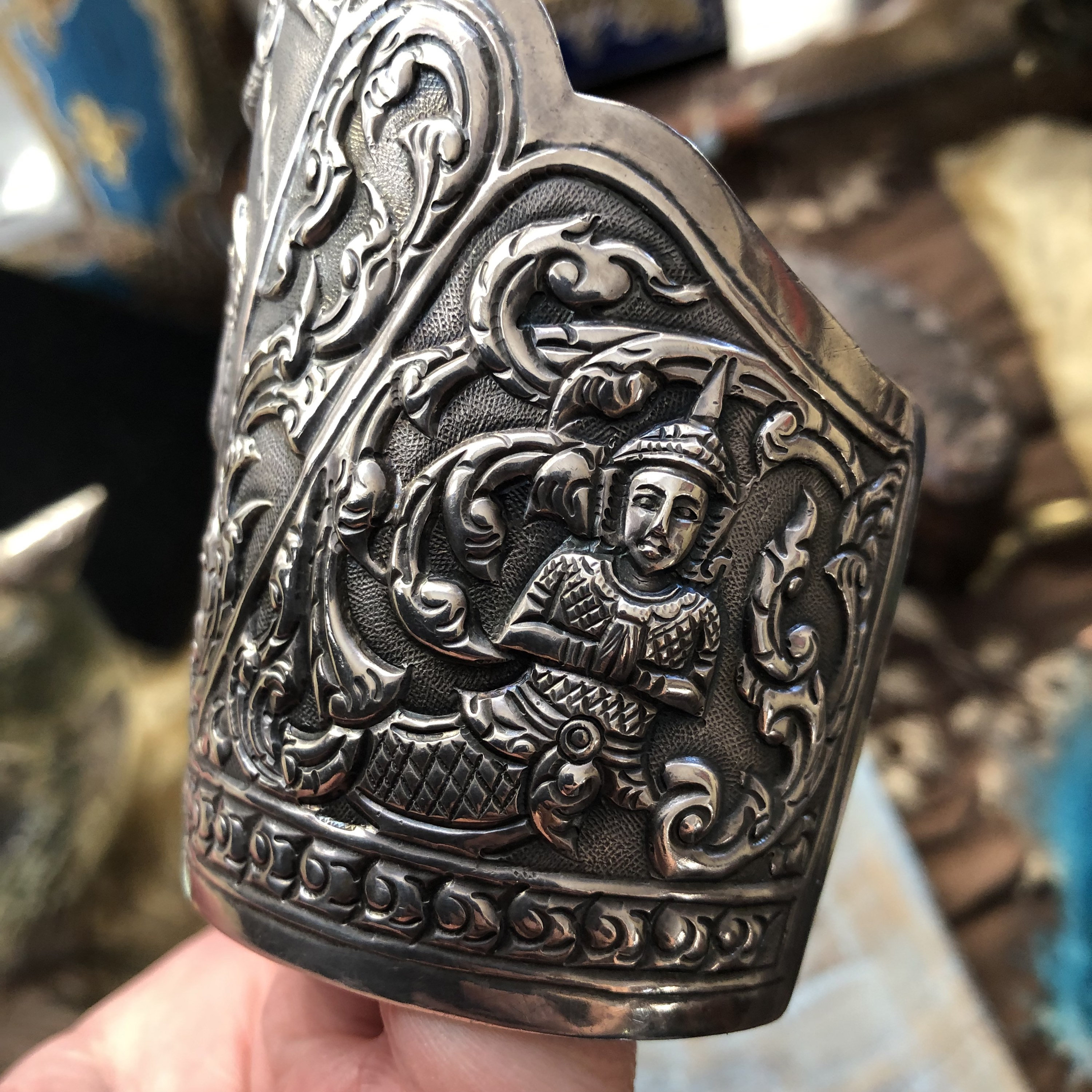 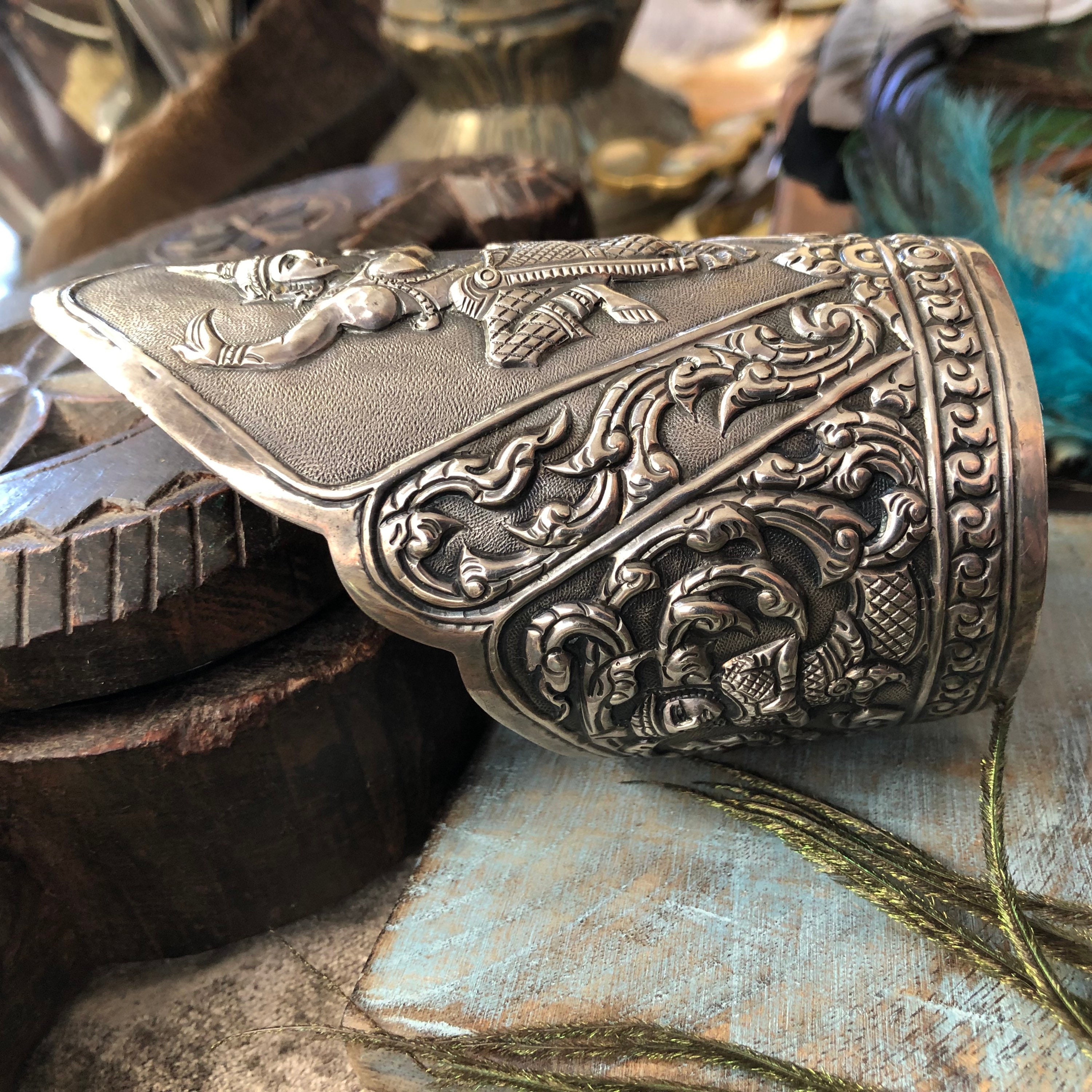 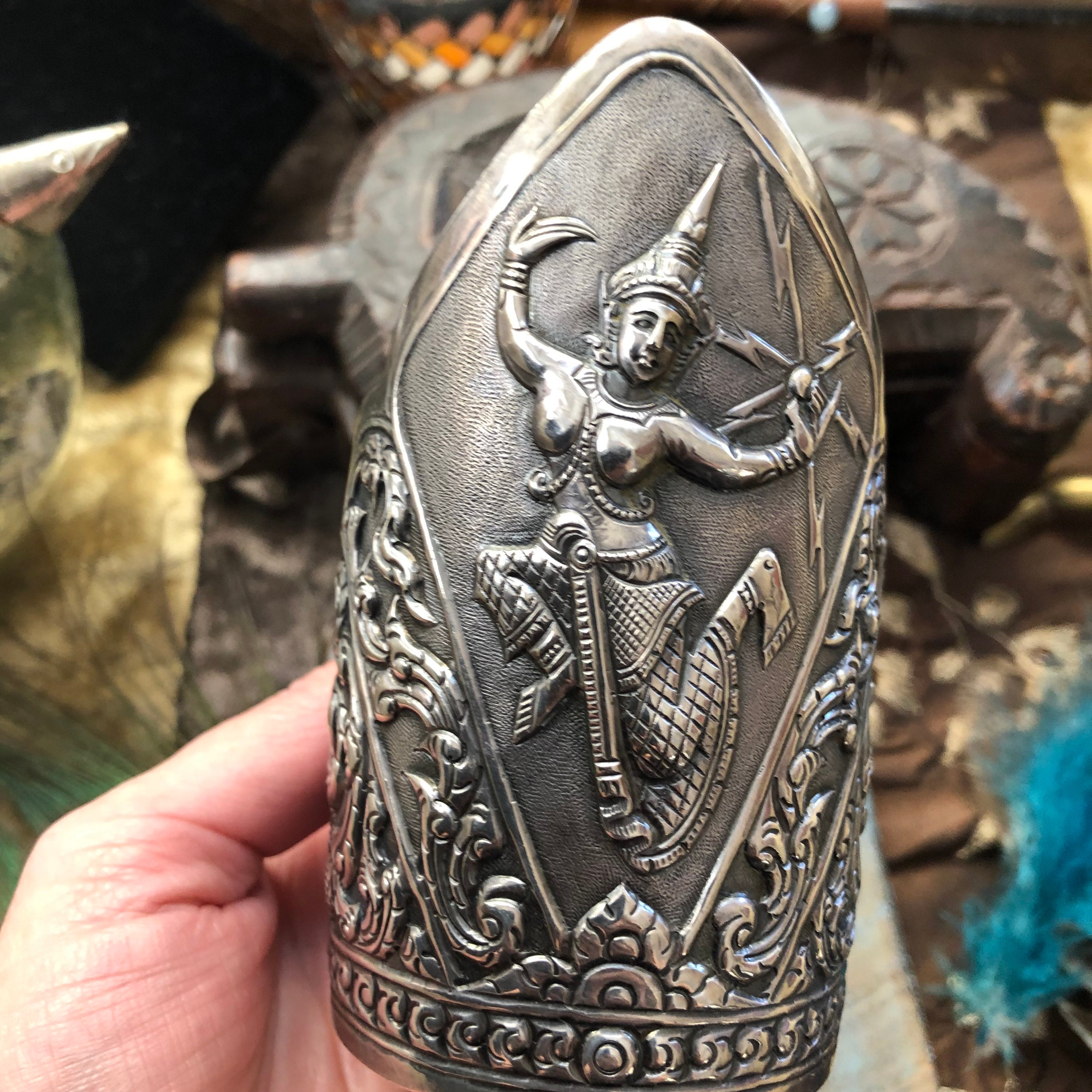 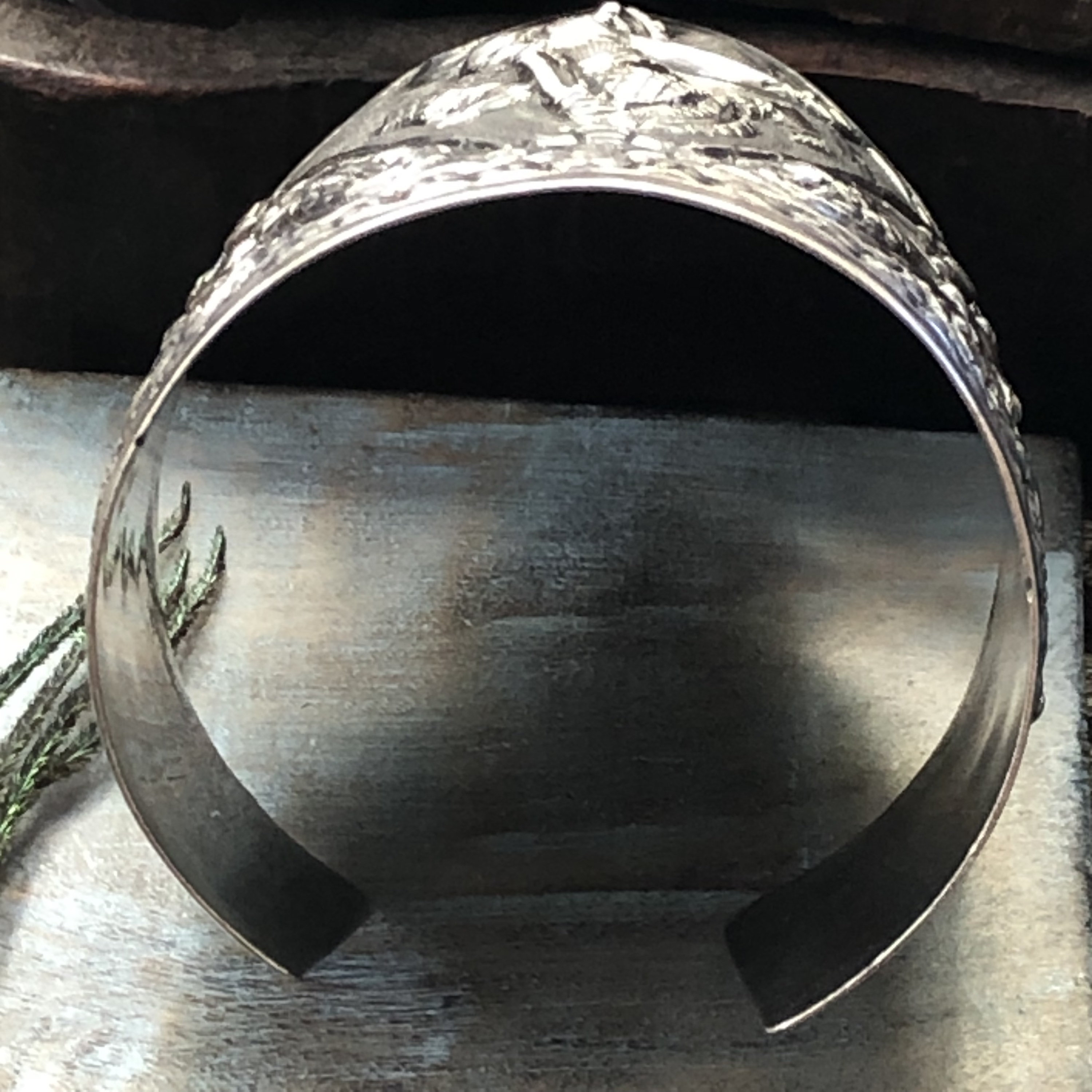 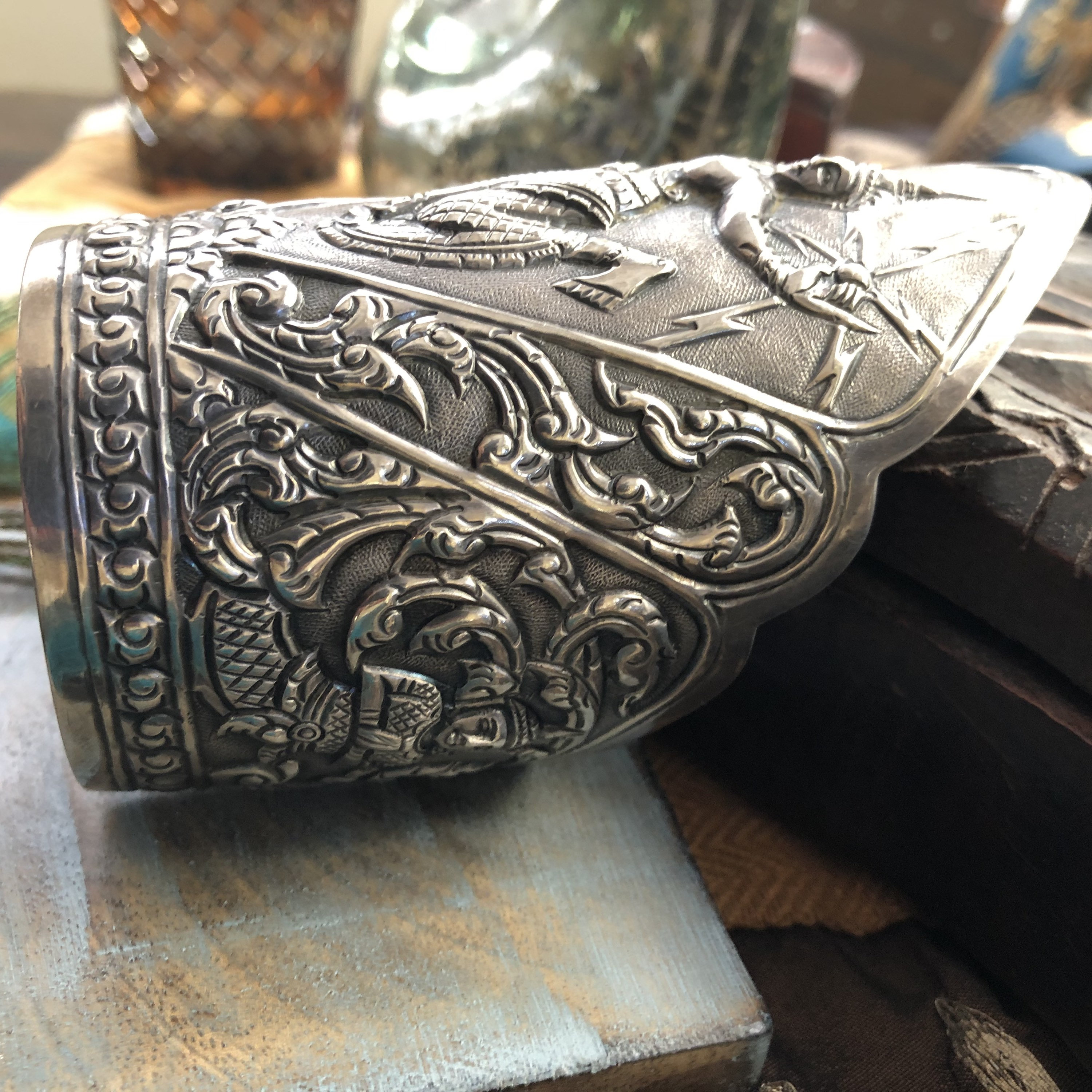 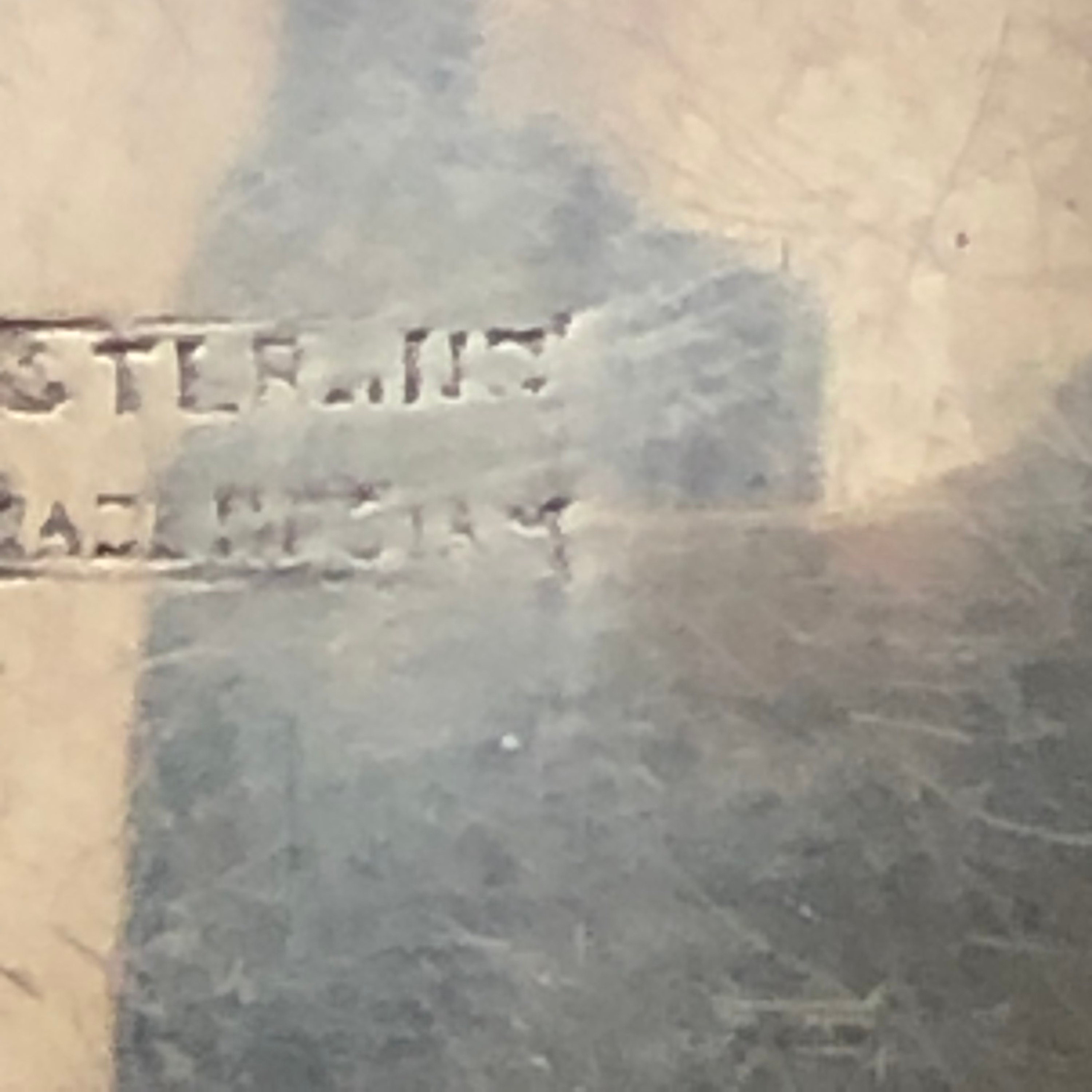 The most common characters found on Siam Sterling jewelry is Mekhala (Make-hala), the Goddess of Lightning, and Ramasoon, the God of Thunder. Their story is quite old and originated in Buddhist mythology. Imported into the Thai culture, it has been interpreted into may versions. The following is the most common and seems to encompass all the versions, if not exactly, then within the spirit of the story.

Mekhala was a nymph and was born of the sea, of the froth of the waves. With bewitching eyes and long curling black locks, her beauty knew no bounds. Mekhala loved to soar through the heavens and across the waters, flitting this way and that. One day, while flying high in the sky she was spotted by Ramasoon.

Now Ramasoon was also a God. He was born of the storm clouds and the rain was his cloak and carried with him a battle axe. The first time he saw Mekhala he fell in love with her beauty and knew right then and there that he had to possess her.

Mekhala did not feel the same way and she spurned Ramasoon’s advances. In fact Mekhala often teased Ramasoon, she mocked him before quickly flying up and way into the clouds. Ramasoon decided that even if he could not win her heart, he had to possess her.

The next time he saw Mekhala he set chase. Dark storm clouds gathered around Ramasoon and cloaked him from Mekhala’s view. His plan was to wound Mekhala so that she could not escape him and he would make her his own. When the time was right Ramasoon threw his battle axe hoping to capture the beautiful Mekhala.

At the same time Mekhala held out her hand in which was a magical jewel, a crystal that she used for protection. Bright light flashed from it blinding Ramasoon as he threw his axe. The axe missed its mark and rattled harmlessly across the heavens as Mekhala made her escape.

Thus we have the story of lightning and thunder.

Payments are due at time of purchase you may use your credit card through Etsy's direct check out or paypal, you don't need a paypal account to use it !

Periodically I run sales and discounts are given with coupon codes. To receive the discount the buyer must enter the code at checkout to recieve the discount I am unable to correct it once purchase is made if you need any assistance please contact me

I want you to be happy with your purchase so please ask as many questions as you need and if you need additional photos .
All vintage jewelry items are pre owned items and are sold in as is condition
please take the time to know your ring size and measure your wrists before purchasing, I can certainly help with this too .
NO REFUNDS at this time as it is hard on small business owners but you are welcome to exchange within 7 days of receipt, item must be in original condition . shipping item back is buyers expense but exchanged item will ship out free .
I do my best to portray my items as best I can. If I have made a significant error in the listing item will be fully refunded when notified within 24 hours and returned back to me in the same condition within 7 days .

However that being said exceptions can always be made, handled on a case by case basis

PLEASE always give sellers the chance to make the transactions to your liking BEFORE you leave negative or neutral feedback. Feedback is the only real way to gauge a seller’s credibility. Please do not take this lightly. Let’s all be kind to each other and help the small business community thrive as we support each other. Once again, please contact me FIRST if you have any issues, before giving a negative review. I love what I do, and aim to receive 5 stars on every sell.
Thank you!
love and light to all!

0 items in your cart